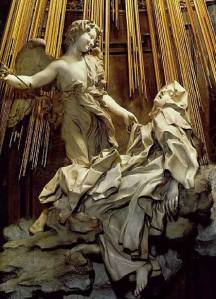 Gian Lorenzo Bernini (The Ecstasy of Teresa of Ávila)

Whenever I find myself alone regarding my experiences with God and I am tempted to let myself go, there is only one thing I can do, and that is, to look at Him who knows how it feels to stand alone. Even though tears might fall down still, there is sooo much comfort in knowing that He endured the same. And surprisingly, God doesn’t want us to remain in our suffering as if there were no hope. Quite the contrary.

More and more I have been realizing that suffering is not the ultimate purpose but only the means to receive His joy at its fullest. Sounds crazy, doesn’t it?

Tell anyone you know who doesn’t know Christ that you would love to suffer for Him, he would shake his head, to say the least. And I do understand such reactions, of course. Yet, thinking of Stephen for example, we read that those beholding him saw that his face was like the face of an angel (Acts 6:15) when he proved to be a witness for Christ. And shortly afterwards we see as soon as Stephen had finished speaking before the council, “they were enraged” (Acts 7:54) while Stephen was ”full of the Holy Spirit, gazed into heaven and saw the glory of God, and Jesus standing at the right hand of God.” (Acts 7:55).

Why did Stephen speak out what he was seeing? And what does it mean?

A few years ago, as I was thinking the issue of martyrdom completely through, I experienced the Good News at its best.
I was lying in bed and praying, that is, talking with Jesus. As I was pondering on various agonizing modes of death, such as being drowned, being burned, being cut up, or having your eyes being gouged out – I guess you get the “beautiful” picture that arose in my mind 😉 – I heard the Lord whisper into my ear, “Don’t you worry about such things, my dear. I bore such pain on the cross. And I’ll show you what I mean.”

Thank God, there was another saint who experienced such a mysterious introduction into the inner sight of suffering for Christ. Since Teresa of Ávila, also called Saint Teresa of Jesus, who was a Spanish Carmelite nun in the 16th century, obviously had a similar experience. Many years ago, I read a lot about her spiritual experiences with Jesus and there were some books of hers that had helped me immensely to intensify and deepen my prayer life. Well, and then there was one entry as to her experiences with Jesus which caused me to laugh out loud. She said (paraphrasing),

“My deep respect toward martyrs has declined sharply, now, that I know how much the Lord helps.”

In fact, it was so freeing for me to read that I was not the only one who had been prepared for the possibility of martyrdom. [BTW, Teresa just died a normal death as everyone else for she had been able to throw the inquisitors off.]

Today, I am convinced that Stephen enjoyed every stone thrown at him, and maybe, he left his body shortly before he, that is merely his body, really died. Since, who could refrain from entering heaven when he sees the gates have already opened for him?

Oops, I almost forgot to mention that I know how it feels to leave your body before you die. Not only during my near death experience (NDE) (*), but also on a few occasions during the last almost two decades, I suddenly found myself “elsewhere”. Indeed, whenever you leave your body, you won’t feel pain anymore. This is Christ’s life that feels like we were actually on another level when we are being filled with His Spirit. The world doesn’t know of God’s mysteries which are all hidden in Christ (Col 2:2-3), but we may know: “It is finished!” Forever. Amen.

“He was despised and rejected by men; a man of sorrows, and acquainted with grief; and as one from whom men hide their faces he was despised, and we esteemed him not. Surely he has borne our griefs and carried our sorrows; yet we esteemed him stricken, smitten by God, and afflicted. But he was pierced for our transgressions; he was crushed for our iniquities; upon him was the chastisement that brought us peace, and with his wounds we are healed. (Is 53:3-5 ESV)”

29 thoughts on “Would you love to die for Jesus?”