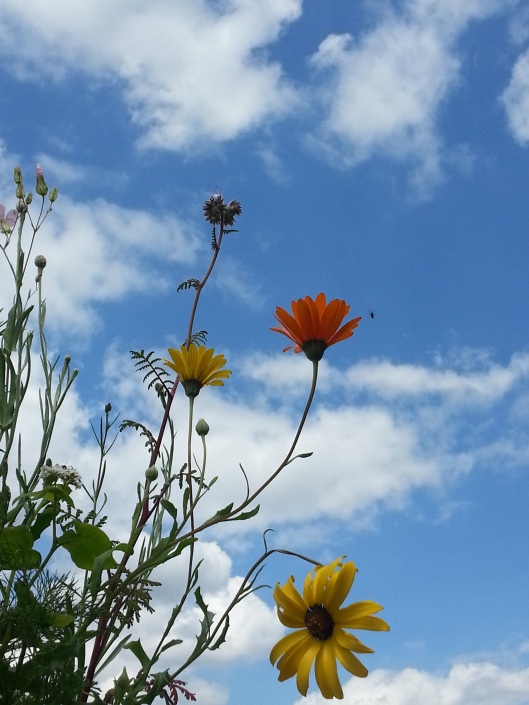 Seek The Things That Are Above…
(Photo by Susanne Schuberth)

So often it is stated that faith only comes by hearing and some say if you do not listen to the gospel preached in audible words, you cannot attain faith at all. I often wondered whether that statement was true. Do we know how many people, actually, were able to read and write at the time when the gospel would be preached for the first time? And in the centuries afterwards?

If there were not as many, the only means to reach them with the word of God was through preaching. Considering those few letters in the NT that were addressed to a rather limited circle of recipients, we might assume that the usual way to attain faith when people were not as well-educated as they are today was most probably through hearing the gospel. But nowadays an incredible amount of people not only can read, however, they have access to any kind of writing through the internet.

As for me, I can say that God would use different means to give me faith in Him. Whether it was the written word, if He made a painting come alive, or if He spoke directly to my heart, in all cases I could immediately trust Him without the slightest doubt afterwards and without having heard ONE spoken word. Regarding the “written word” God dared to not only point me to the Bible or to Christian books, no, even non-Christian religious writings or psychological articles strengthened my faith in Him. Therefore I think that the Bible verse below should not be translated one-dimensionally. We read,

Of course, Romans 10:17 might mainly refer to coming to faith in Christ as our Savior at all. BUT – does that mean that we already have faith in every area of life as soon as we believe that Jesus saved us from our sins in order to give us eternal life? Barnes’ Notes on the Bible offer the following explanation which I found rather helpful as to my own experiences with God. These notes say,

By hearing – Our translation has varied the expression here, which is the same in two places in the Greek: “Isaiah said, Who hath believed our report τῇ ἀκοῇ tē akoē? So then, you must admit that faith comes by that report ἐξ ἀκοῆς ex akoēs, and therefore this report or message is necessary.” When it is said that faith cometh by hearing, it is not meant that all who hear actually believe, for that is not true; but that faith does not exist unless there is a message, or report, to be heard or believed. It cannot come otherwise than by such a message; in other words, unless there is something made known to be believed. And this shows us at once the importance of the message, and the fact that people are converted by the instrumentality of truth, and of truth only.

Aha! “A message, or report, to be heard or believed.” We do not necessarily need to hear a message or a report with our own ears, today we can read them as well. We may not forget, either, that not everyone who hears the gospel can indeed believe it because his ears might be stuffed as it is confirmed by different Scriptures. In Rome the apostle Paul even caused division between the Jews so that they departed after Paul had made one statement: “The Holy Spirit was right in saying to your fathers through Isaiah the prophet: “‘Go to this people, and say, “You will indeed hear but never understand, and you will indeed see but never perceive.” For this people’s heart has grown dull, and with their ears they can barely hear, and their eyes they have closed; lest they should see with their eyes and hear with their ears and understand with their heart and turn, and I would heal them.’ Therefore let it be known to you that this salvation of God has been sent to the Gentiles; they will listen.” (Acts 28:25-28 ESV)

Oh! 🙄 Isn’t it God Himself who makes us “listen”? Isn’t it listening with our heart which is crucial, wouldn’t you say? Imagine if the one-dimensional, literal meaning of hearing the gospel being preached audibly was true, all people who were born deaf would never be able to come to believe in Christ. And what about those who cannot speak because they were born dumb? We also read,

If you confess with your mouth that Jesus is Lord and believe in your heart that God raised him from the dead, you will be saved. For with the heart one believes and is justified, and with the mouth one confesses and is saved. For the Scripture says, “Everyone who believes in him will not be put to shame.” (Rom 10:10 ESV)

Who can confess with his mouth when he is dumb? Have we ever considered these Scriptures to have a spiritual meaning as well for they might address our spiritual senses first? Another question: Can we talk with God without opening our mouths? I tell you I can since I rarely talk loudly with Him. Only when I am mad at God, I usually complain loudly. 😉

25 thoughts on “Faith Comes by Hearing – Only?”