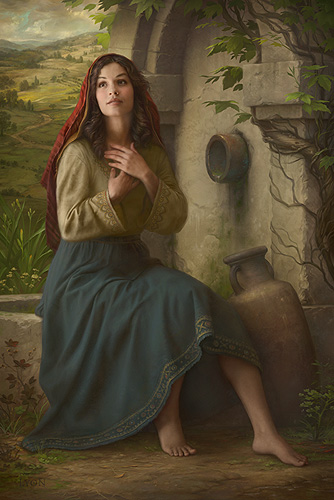 Woman at the Well (Picture taken from http://catholicalcoholic.files.wordpress.com/2014/03/woman-at-the-well-5001.jpg)

Susanne (aka me 😉 ) wrote,“I was just pondering on the fact why we as human beings are not always the same. I mean, there are people with whom we dare to be more open than with others. People of whom we know that they love us and that they will forgive us whatever we might say or do. But there are other people we do not know that intimately and therefore we are a still bit cautious of how to deal with them.” (https://enteringthepromisedland.wordpress.com/2014/12/08/be-who-you-are-since-there-is-no-other-you/)

There is something that the Samaritan woman at Jacob’s well felt about Jesus that made her dare to be totally open with Him. When we hear the story about her preached, many like to say that Jesus confronted her with her sins. Susanne and I hold that this was not the case, but rather she was confronted with how much Jesus loved and respected her in spite of knowing what her past history was. She was shocked that He was even talking with her and asked her for a drink, knowing that Jews did not have anything to do with Samaritans, much less a Jewish man with a Samaritan woman! She was the dog of dogs in the mind of an orthodox Jewish Rabbi.

Yet, Jesus personally shared the gospel with her, “If you knew the gift of God, and who it is that is saying to you, ‘Give me a drink,’ you would have asked him, and he would have given you living water” (John 4:10 RSVA). Jesus told her that He was the Gift of God and that as such He could give her the water of life that flows freely. “Whoever drinks of the water that I shall give him will never thirst; the water that I shall give him will become in him a spring of water welling up to eternal life” (John 4:14 RSVA). What is amazing is that she did not for one moment doubt His offer that He could give her living water and eternal life! She responded, “Sir, give me this water, that I may not thirst, nor come here to draw.” (John 4:15 RSVA). She wanted all that He had for her because she realized that she had met the lover of her soul, the first man in her life who was not interested in what she had to offer him, but who wanted to give her what she really needed. We know that this man was God, too. A human being can never fill the void in our hearts which were created by God to only be filled with His Spirit. His love is the only love that can make us whole again.

Jesus, after offering her eternal life and she wanting it, pointed out to her that she was living with a man who was not her husband. Yet, where was the condemnation? It was not there! Rather He commended her for telling the truth, “I have no husband.” This woman felt no shame or condemnation from Him, only love and respect. And what was her response to this divine encounter? She said to Him, “I know that Messiah is coming (he who is called Christ); when he comes, he will show us all things.” Jesus said to her, “I who speak to you am he. ” …So the woman left her water jar, and went away into the city, and said to the people, ‘Come, see a man who told me all that I ever did. Can this be the Christ?’” (John 4:25-29 RSVA). Jesus had shown her in a few words the very inner thoughts and longings of her heart. Messiah had come and showed her all things including that men would no longer worship God in special buildings or in special places, but that true worship would be done by God’s Spirit within them from lives filled with and demonstrating His truth.

“Come, see a man who told me all that I ever did!” I don’t know about you, but we believe that if this woman had been shamed by what Jesus said to her, would she be telling everyone she knows that there is a man down by the well that knows every sin she ever committed? No, she would be hiding out in her house, hoping He would go away and keep silent! But she ran into her village and rejoiced for having met the Christ. THAT IS THE GOSPEL. She met LOVE personified. He showed her compassion and understood WHY she had sought love in men and had been married five times before. But He did not condemn her in the slightest, but rather told her about where to find eternal life and what real worship of our heavenly Father is all about; therefore she trusted in Him.

All too often the gospel today is presented to people in one of two extremes. On the one hand people get the idea that they have to “clean up their act” before they can come to Christ. The other extreme is that we can be a Christian without ever having to change a thing, we can just go on living in sin with impunity. Neither is true. But we finally see that the love our Father has for us is not contingent on our performance, for He makes the sun to shine and the rain to fall of both the bad and the good. We love Him because He first loves us. What follows from that love relationship is a longing to please the One who loves us so much. We are given the Spirit of God who speaks in our hearts when He wants us to change and what it is that pleases Him and it is because of our love relationship with our Father that we are empowered to change. Love is the most powerful motivator known to man and GOD IS LOVE.

71 thoughts on ““Love Personified” by Michael Clark and Susanne Schuberth”