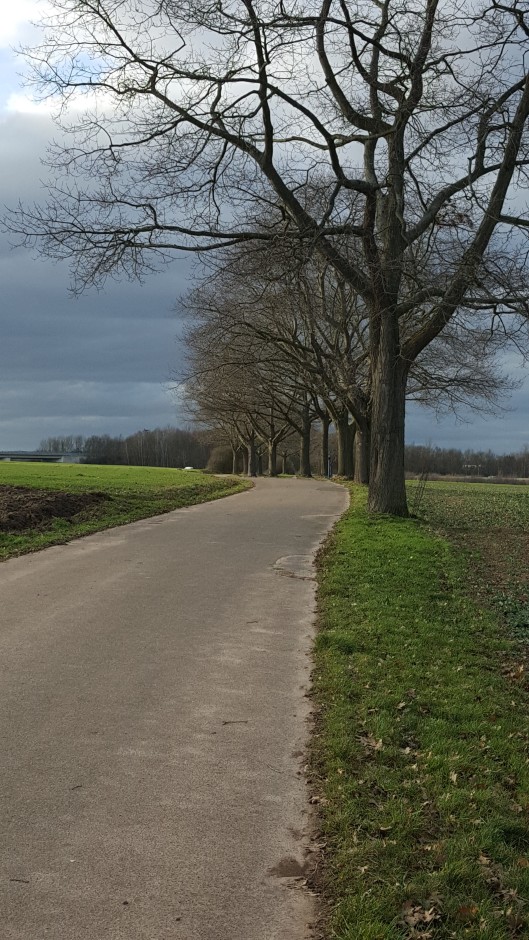 If I jotted down everything I experienced with God lately, it would turn out an overwhelmingly lengthy post. And I do not want my readers to be bored stiff. So, I hope God helps me to put it as briefly as possible and as detailed as necessary. And maybe, I can raise a smile or two from my readers because of my crazy experiences with God.

Today, you can take the headline literally since the alley you can see in the picture I took is called “Kirchenweg” in German, which would be “Church Way” in English. If you walk, bike or drive on this road, you will suddenly see that this path from Oberfürberg (near Fürth, Bavaria) that should have led to the church in 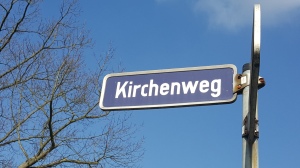 Burgfarrnbach can no longer be walked on in its entirety for there is a highway cutting through this formerly beautiful lane. I need to admit that I dreamed about this alley lately. However, in my dream I had no idea which street the Lord wanted to show me. But two days later as I was on a bike ride around there, I felt that God wanted me to ride this path and no other. I think it was only the second time in my life that I did so since, honestly, who would ever tread on a path, beautiful or not, and follow a road if they knew it was a dead-end street?

Well, on that day I followed God’s sometimes quite humorous leading and took a few photos although I was not yet sure what to do with them eventually. Just today I felt drawn toward this alley again and took more pictures. Afterwards as I continued on my biking tour, I saw that those paths I usually ride on were inaccessible because of forest work. Hmm… Didn’t the Lord lately tell me that He wanted to show me another way? If He says such things and you ask Him what He meant, you rarely get a sudden reply. Sometimes you can take it literally, sometimes you need an interpretation only the Holy Spirit can provide. And sometimes, it is both. You can take His words literally and later the deeper meaning will be brought to light, too. 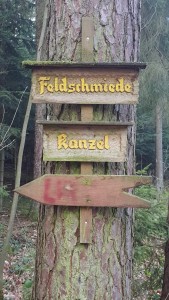 Back to my bike ride. It was rather cold today, but the muddy path God led me went uphill through the woods and so it got warmer quickly. All of a sudden, I felt I had to stop again and take more pics. God is so funny!! I saw three wooden signs on a tree of which the second one in the middle said “Kanzel” which means “pulpit” in English. Hahaha!! XD At first God confirmed that the way of the church was a dead-end street and then he pointed me to a pulpit in the middle of the woods… Very funny, indeed! Yet that was not all. In order to prepare you for the next sign I saw, I need to go back in time two days again.

In the late morning of Wednesday I hurried to the registry office in Fürth in order to renew my ID card. We need to do this every ten years and so I grabbed my new passport pics [you know those biometric photos that bear a striking resemblance to mug shots – wink wink] and left on my bike. Due to an inflammation in my left foot, I had to quit walking lately and so you will find me almost daily with wheels “beneath my feet.” Well, I often find myself in a hurry even if there is no need to feel that way, but although I always tried hard, I could not change that. As I had finally arrived at the second floor hallway of the registry, I saw that it was almost empty. To my amazement there was only one woman who was waiting. Unusual, even this. I felt already relieved as I stood in front of the touch screen display where I ordered my turn ticket. “Lo and behold!!” Hahahaha… Susanne got # 111! 🙂 I really had to grin as I sat down in a chair. But nooo!! Even after only one minute, I saw on another screen that # 111 was called to come to counter # 1. Big grin… In a funny mood I entered and had a great time with that friendly and pretty young woman behind the counter.
Leaving the registry again, I thought I could at least ride a bit more on my bike. Although it was chillingly cold, I pondered that lunch would taste better after some more kilometers. As I was still thinking about God’s humor and about how he took my feeling of being stressed completely away by providing # 111 for me, my glance lighted on the top of a big tree. Oops!! What was this? 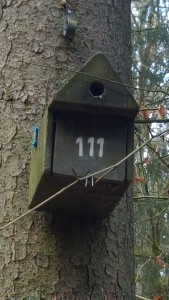 Bird house in the woods
(Photo by Susanne Schuberth)

Believe it or not, there were three ravens sitting side by side on a branch, a living confirmation of the number I had just drawn before. So, I do hope you are now prepared for the picture I took immediately after I had seen the “pulpit” sign in the woods today. Actually, I only rode a few meters until I saw an ordinary brown bird house on a tree to my right with the number…? I guess you know which one. Just compare it with the picture I posted on here.  Oh, before I forget to mention it… as I took some new photos today along that alley, you can be sure that there were at least three ravens around, watching me from a tree right behind me… 😉